Rooted in Research February 2021 Webinar from Forest Service on Vimeo.

Session 1: Towards fuels monitoring at the push of a button - Automated laser scanning for plot-level fuel loading and fire effects 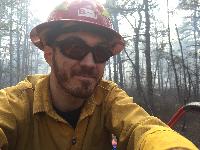 Dr. Michael R. Gallagher, Research Ecologist
Ticks are a critical vector of infectious diseases to humans. Anecdotal evidence suggests that controlled burning once was thought to be an important control of ticks in the eastern United States. Over the past 100+ years, the “fire suppression” era has marked a substantial loss of prescribed fire in many eastern forests, while at the same time many other factors have marked the rise of tick populations. Given what we now know about tick ecology and fire effects, it is plausible that fire could sustain reductions in ticks. New research by the Northern Research Station compares tick populations between burned and unburned pine. Results demonstrate important linkages between tick populations and fire frequency and severity that may reduce habitat quality for ticks.